Posters are designed. Posters are used. Posters are forgotten. However, some posters remain in the pages of history forever. We Can Do It, sometimes misidentified with Rosie the Riveter, is one such poster.

You sure have seen this poster at least once in your life. And it is highly likely that, nine out of ten, you have seen it in connection to feminism, women’s rights, women’s movements, women empowerment campaigns and the like. Over the last few decades, We Can Do It poster has become a universal icon of feminism and women’s empowerment. 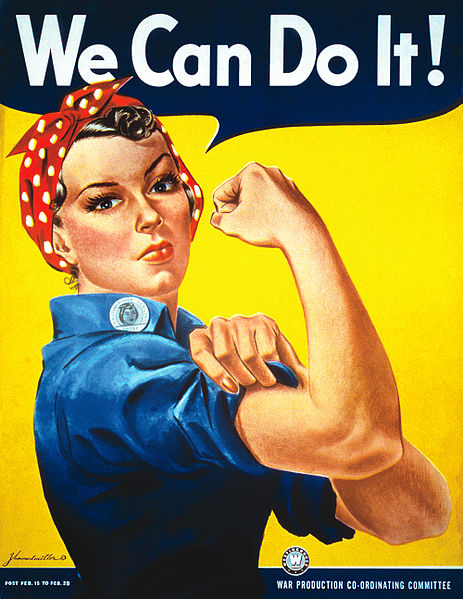 From coffee mugs to cushion covers, from  Tshirts to tote bags, this woman with her clenched fist and rolled-up sleeves has become an integral part of our popular culture. 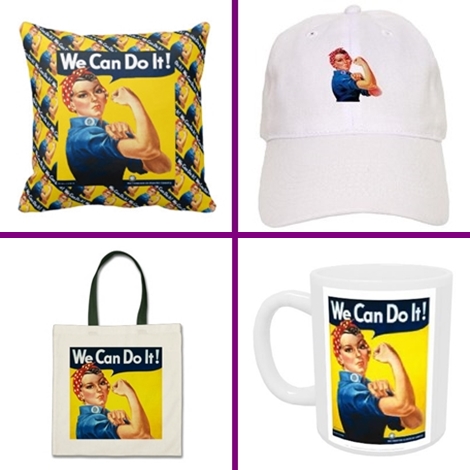 It goes without saying that the We Can Do It poster was reproduced and parodied multiple times and in multiple ways. Some of them were impressive; some of them, nauseating.

Yet, nothing outdid the original poster – the woman in blue shirt and polka-dotted red headscarf; a company badge pinned on her collar; her right hand up with its fist clenched; her left hand rolling up the sleeves.

This women’s day, we bring you a short history of this popular poster that has almost become a cult across the globe.

A war, a girl, and a poster

Those who think this poster was designed as part of some great American women’s rights campaign or UN funded women’s empowerment initiative are clearly in for a surprise. It was designed and used in a US factory as part of their wartime propaganda during World War II.

In the period during World War II, the US witnessed an unprecedented shortage of male workers since millions of men were sent overseas from the country. With its men gone and jobs left unfulfilled, the economy of the country went for a toss. Moreover, the lack of ample number of workers made the production of wartime materials a tough task.

This prompted the government to recruit female workforce in large numbers. Advertising agencies such as J. Walter Thompson played a major role in designing and conducting campaigns for encouraging women to join the wartime workforce and fulfill their duties as the true citizens of the country.

In 1942 Westinghouse Electric & Manufacturing Company hired J. Howard Miller, an American graphic artist, to design a series of posters for its wartime propaganda. We Can Do It was a poster in that series, and at that time, the poster made no big waves, nor did it carry any feminist connotations.

Here is another poster from Miller’s series 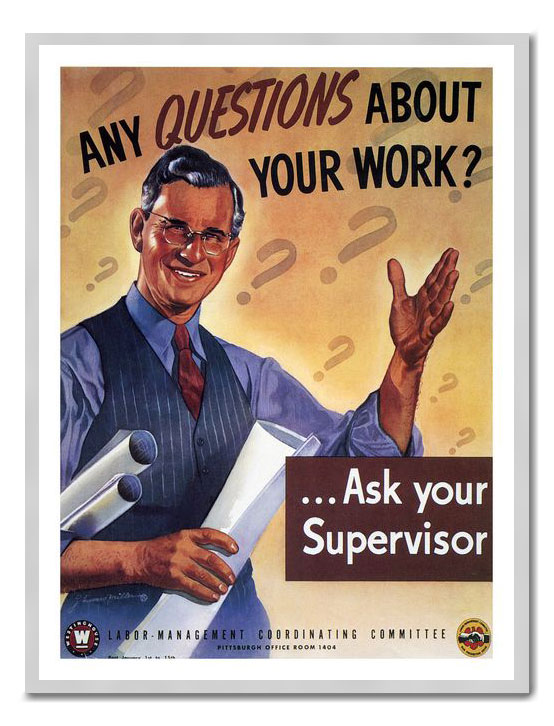 It is believed that the model for this poster was a factory worker named Geraldine Hoff Doyle. She didn’t pose for this poster, of course. She worked in the company as a metal-presser operator for a short period. During this period a United Press International photographer captured a black-and-white picture of Geraldine. She was about 18 years when this photograph was taken.

The original photograph shows Geraldine at her workspace. She is on duty, leaning over the metal-presser machine and operating it with her left land. She is also seen wearing polka-dotted headscarf, a detail Miller reproduced in his poster too. 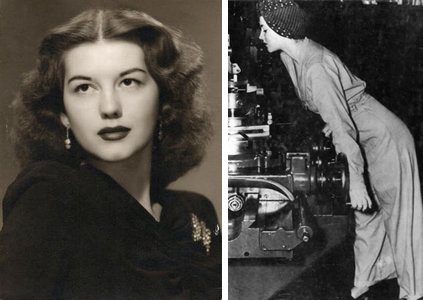 Geraldine Hoff Doyle was a cellist (cello is a musical instrument like violin). She feared that she would lose her ability to play the instrument if some injury happens to her hands. So she left the job within weeks of joining and found a new job in another factory as a timekeeper.

Miller was inspired by this black-and-white photograph of Geraldine. We Can Do It is believed to be a free interpretation of the photograph. The poster was in use only for a couple of weeks; it was displayed on the walls of the factory in February 1942 and was removed from the walls after two weeks.

Misidentification with Rosie the Riveter 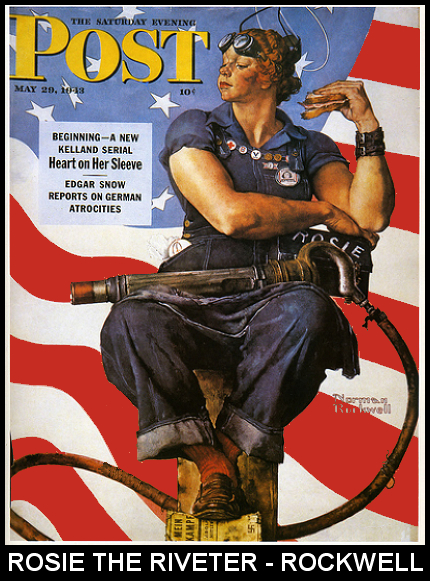 In the original image Rosie is a red-headed woman. She can be seen as holding a riveting gun on her lap and eating a sandwich. There is a lunchbox underneath her elbow, with her name ‘Rosie’ written across it.

Unlike Miller’s We Can Do It, which was in use for hardly two weeks, Rosie became hugely popular and was used widely as part of the wartime propaganda. When We Can Do It poster was rediscovered in the 1980s, it also came to be known popularly (and mistakenly) by the name Rosie the Riveter, although at the time of its creation it was not connected to Rosie the Riveter.

In search of women workforce

During the period of World War II, a number of posters were designed to recruit female workforce. Here are a few posters designed and circulated in the US.

Another post designed by Norman Rockwell. It appeared on September 4, 1943 in Saturday Evening Post. The woman in the poster is representative of the wartime American woman who should/can do multiple jobs to help the war effort. 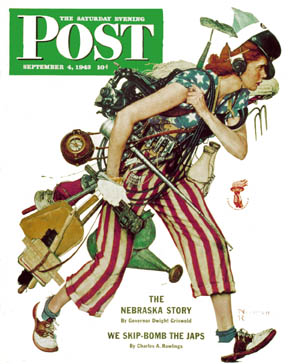 This poster was to recruit women as typists and stenographers to assist the military effort. The rationale behind this poster is that women doing such office jobs will free male troops to do military activities. 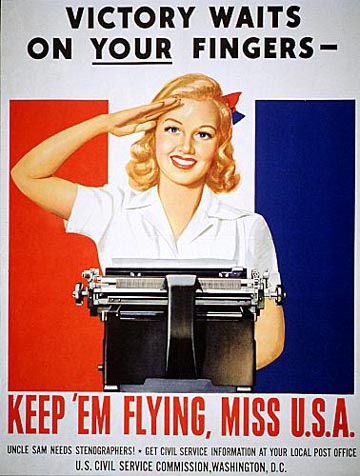 This one is classic 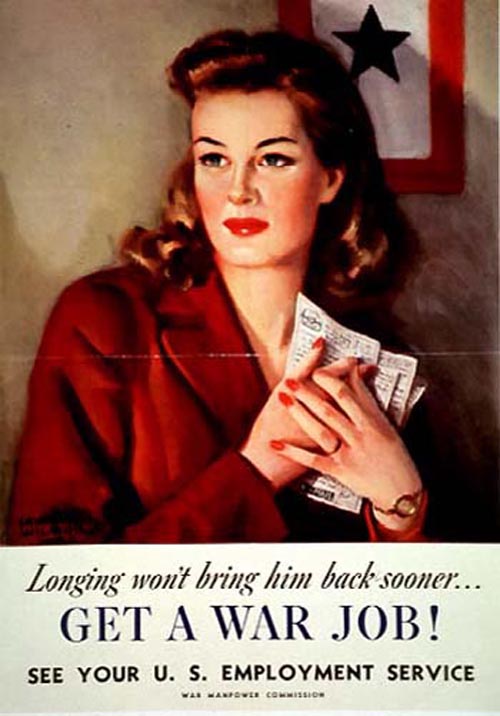 Here is another one. 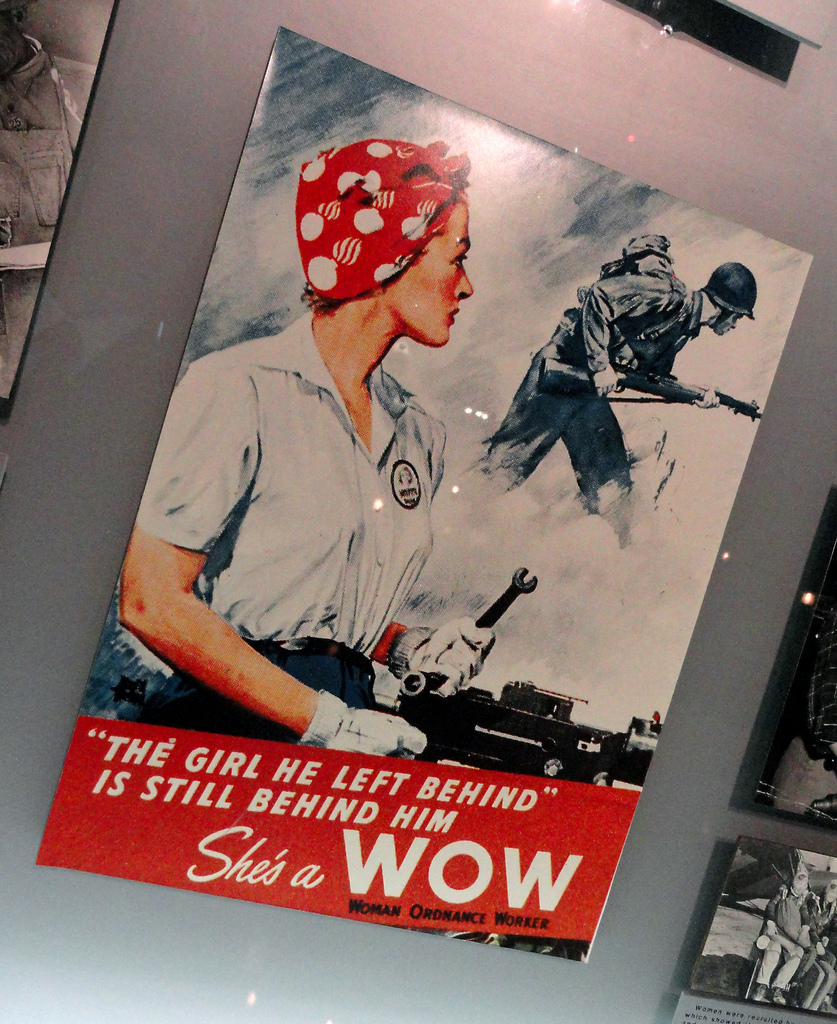 Of course nurses were in demand.

A disappointing end to the campaign

The bring-more-women-into-workplace campaign launched by the US government in the 1940s, despite its success, had a very disappointing end. Indeed more women were enrolled in the wartime workforce. They were praised and glorified during the wartime as true patriots. Their labor force was used across almost all job profiles. 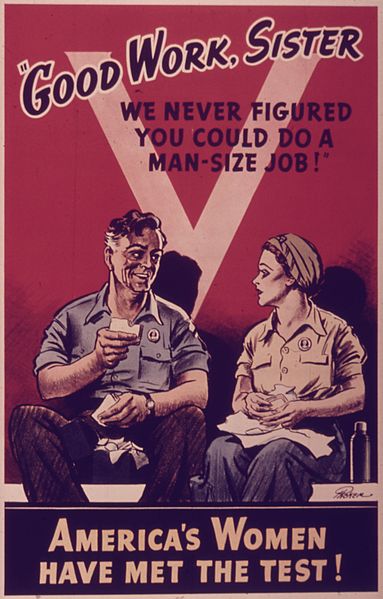 However, when the war ended, these wartime women workers were encouraged to return to their families as homemakers; to take care of their children; to provide for their military-returned husbands.

The rediscovery of We Can Do It

Some things are like that; even if pushed down into the bottom of time and to the last pages of history books, they resurface; they resurface powerfully. So did the We Can Do It poster in the 1980s, in the wake of feminist movements. Today, the poster is used extensively in the fight against gender inequality and the “we” in the poster is taken to mean “we the women”.

A poster that was designed to extract the labor force of women during World War II, thus, became the visual icon of gender equality and empowerment. Some may call it coincidence; we call it history’s poetic justice! 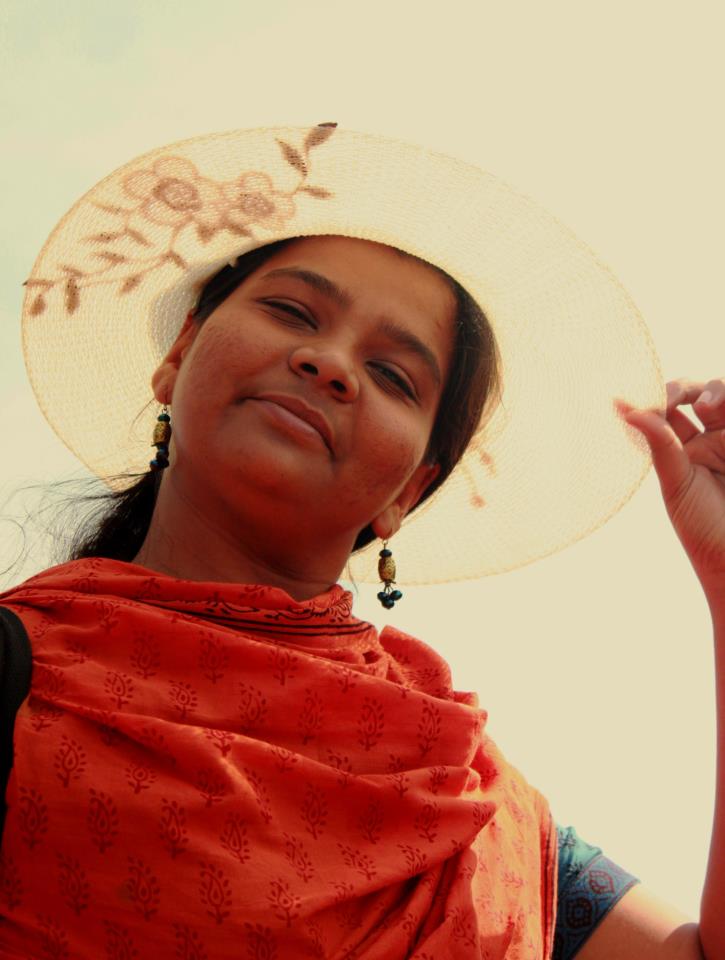 Meera Moorkoth is one of the co-founders and the Creative Director of Coffeegraphy. Her areas of interest include creative writing, e-Learning and pedagogy, and travel writing.
Tags: we can do it, we can do it poster, women's day

Meera Moorkoth is one of the co-founders and the Creative Director of Coffeegraphy. Her areas of interest include creative writing, e-Learning and pedagogy, and travel writing.

10 Tips and Tricks for the Working Mom

How to Beat Writing Roadblock Blue

Whims of a Work-From-Home Mom

LATEST FROM THE BLOG